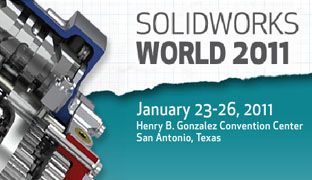 2011 is here already!  Time has been moving very fast for me lately which is part of the reason posts on this blog have slowed.  Axis CAD Solutions LLC has been very busy creating images and animations over the last year and if you’re using SolidWorks 2011 you’ve had a glimpse at some of them.  I’m excited 2011 has arrived for a couple of reasons and one of those is SolidWorks World 2011.

I’ve been to every SolidWorks World since 2006 and I still get excited about seeing old friends, meeting new people and giving presentations.  Speaking of presentations, I’ll be giving three of them this year.

PhotoView 360: Instant Images is a hands on session I’ve given for the last couple of years.  For 2011 it has been totally updated with a new model showing the latest PhotoView 360 functionality for 2011.  This session has been popular in the past and this year SolidWorks has added a second time slot in response to an overflowing waiting list.  You may still have time to sign up for this one but you’ll have to hurry. 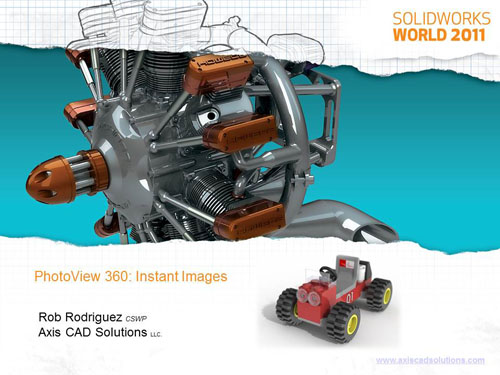 PhotoView 360 2011: This Changes Everything is a session focused on PhotoView 360 2011 and how it compares to PhotoView 360 and PhotoWorks 2010.  I’ll give a good general overview of the PhotoView 360 2011 feature set, talk about the new workflow options and highlight the difference from previous versions.  This is a 90 minute session so there should be plenty of time to cover a lot of information. 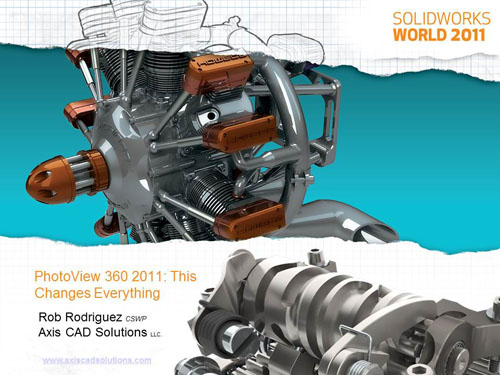 SolidWorks to Modo: What’s in the Kit is a session that will take a look at the soon to be released SolidWorks Kit from Luxology.  This kit has been created, tested and revised over the last year and you’ll finally get a look at SolidWorks World 2011.  For this session I’m teaming up with Paul McCrorey.  Paul has been a SolidWorks to Modo pioneer from the begining and I know he’s ready to show his stuff.  It will be a lot of information to pack into a 60 minute session but if you’re a SolidWorks user who wants to explore Modo it’s a must see. 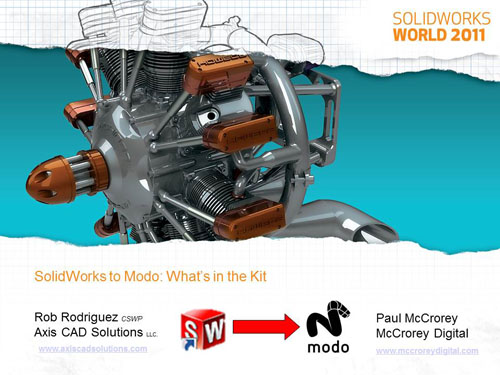 If you haven’t signed up for SolidWorks World 2011 there is still time.  In fact, if you sign up before January 7th you’ll receive the early bird 2 discount of $100.  Having a CSWP will save you another $100 so it’s not to late to attend and save some money.  Hope to see you at one of my sessions 😉