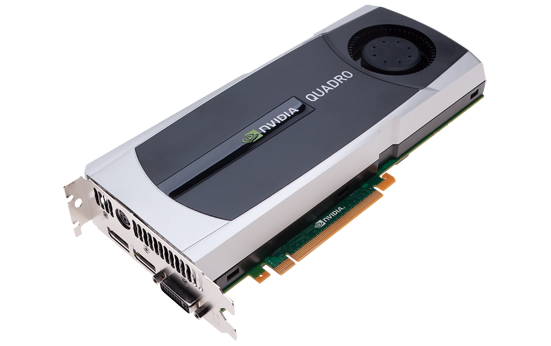 In September Brian Harrison from NVIDIA contacted me and asked if I’d be interested in trying out a new Quadro 5000 graphics card.  I know most people would need their arm twisted to try out the latest hardware or software from a company but I jumped at the chance for a couple of reasons.

First off , I wanted to see if this new NVIDIA card performed better than my current Quadro FX 3700.  The 3700 hasn’t been a bad card for me but it’s based on older technology and the 512mb of  on board RAM fell short at times while working on demanding assemblies inside of SolidWorks.  I also quite often receive a very annoying, “your system is running low on SolidWorks resources” warning that I attribute to the 512mb of memory on the card.  I don’t know the low card memory is causing or contributing to the error (it could be an issue with SolidWorks managing resources) but a good way to find out was try a new card.

Second, I wanted to give GPU rendering a try.  My new license of BunkSpeed Shot showed up a while ago but I haven’t been able to try out the GPU rendering feature of the software because my FX 3700 didn’t support it.  The Quadro 5000 would let me experience the new GPU processing technology first hand.

Before we get started I’d like to give the full disclosure up front.  NVIDIA provided me with a Quadro 5000 graphics card (which retails for approx. $2250) to use and test as I felt necessary with whatever software I wanted.  When I was finished using the card for this purpose I was able to keep the card for long term testing and usage.  I’ll have another post at some point in the future pertaining to long term usage and use with other types of software.

The NVIDIA Quadro 5000 Specifications: The Quadro 5000 is built on the NVIDIA Fermi Architecture and is advertised as being able to deliver speeds up to 4X faster than previous generation Quadro cards.  The card carries and impressive spec sheet of  features and honestly I’m not sure what some of the information on the spec sheet means but there were a couple of numbers that caught my eye.

The first eye catcher was the “CUDA Core” category which listed 352.  NVIDIA CUDA technology is a parallel computing architecture that enables applications to take advantage of GPU processing.  GPU processing can be used for applications such as raytracing (rendering), video processing and FEA which require high levels of computation to process the information.  The iray rendering engine found in BunkSpeed Shot is specifically designed to take advatage of the NVIDIA CUDA architecture and this is supposed to greatly increase rendering times.  This is one of the areas I wanted to try so I was excited about the 352 CUDA cores.

Second eye catcher was the “Total Frame Buffer” number of 2.5gb.  That’s 2.5 gigs of RAM on the Quadro 5000.  That kind of memory was much more than other graphics card I’d ever used and I was anxious to see how that effected large assembly performance in SolidWorks.

One other note of interest for me was the physical size of the Quadro 5000.  This card takes up two full slots in your PC box making it twice as thick as my FX 3700.  Length and width were about the same as my old card and the Quadro 5000 plugged into the mother board without a hitch. 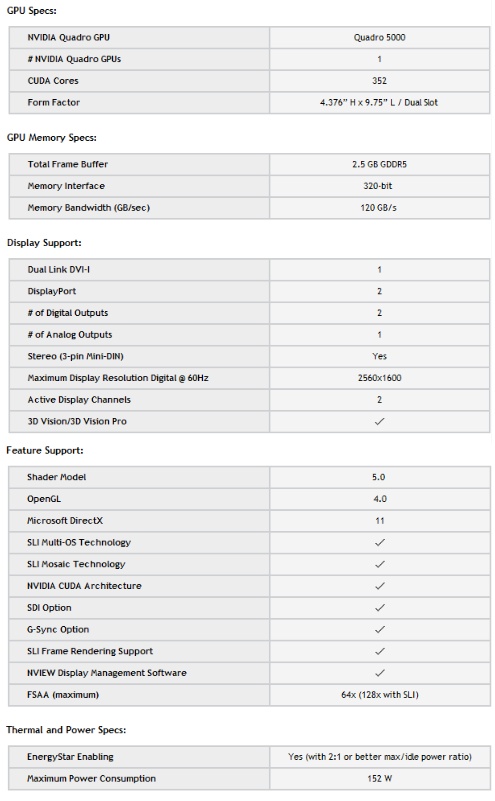 How does it work with SolidWorks? First step after installing the Quadro 5000 was load up the approved driver from the SolidWorks website.  That was a painless process and the driver is approved for both SoildWorks 2010 and 2011 usage.  I spent about 30 days testing the card with SolidWorks 2010 on a daily basis.  The work was varied and included, modeling (both part and assembly), detail drawing creation and rendering.  My typical assembly file is 100 parts or less so I wouldn’t say my SolidWorks usage stresses my system all that much.  The exception to this is rendering.  I’m rendering on a daily basis using both PhotoWorks and PhotoView 360.  Both of these applications is very CPU intensive and neither has the ability to utilize GPU processing so having the Quadro 5000 for these applications didn’t help much in the way of rendering processing.  The card preformed very well in those 30 days of testing and I didn’t receive the “your system is running low on SolidWorks resources” warning.  Not once, which was a nice surprise.  As stated before I’m not 100% sure graphics cards with lower RAM are causing this warning but I didn’t receive it with the Quadro 5000 (2.5gb RAM) and I certainly would have with my FX 3700 (512mb RAM).  I did have some crashes during my SolidWorks usage and there was some screen glitches (repaint issues when switching windows).  This is not uncommon for me however so I’m not sure I can attribute these specific instances to the Quadro 5000.

I don’t typically take a lot of stock in hardware benchmarks.  Benchmarks will give you part of the story but every users has different habits and work their completing varies so in my opinion there is nothing like real world usage to test hardware.  I did run the new SolidWorks performance test found in SolidWorks 2011 just to see what kind of results I could get.  When compared to others scores I faired very well.  Have a look, I’m listed as RobR XI.  For reference I’m running an Xi built PC with a core i-7 965 3.2 ghz CPU, 12 gigs of RAM on Vista 64. 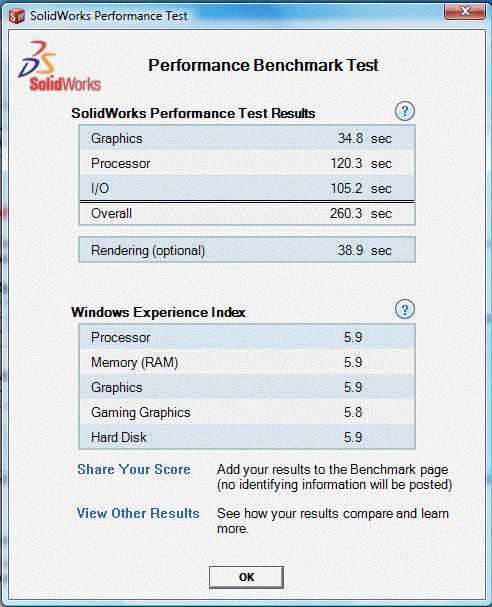 I also wanted to give a larger assembly a try so I loaded up the largest SolidWorks file I had on my PC, about 6700 parts.  Have a look at the video to see the results.

How does it work with BunkSpeed Shot? Shot is the replacement software for HyperShot from BunkSpeed.  Shot is built around the iray rendering engine from Mental Images which is a division of NVIDIA.  Being a HyperShot owner I received a copy of Shot when it was released a couple of months ago.  Shot is designed to process renderings with either the CPU, the GPU or in a hybrid mode which uses both CPU and GPU together.  In order to use the GPU and hybrid  rendering features in Shot you need to have an NVIDIA graphics card which supports CUDA.  BunkSpeed claims at their website that using a CUDA enabled graphics card can significantly accelerate performance.  This is something I wanted to try and the Quadro 5000 with it 352 CUDA cores was going to allow me to do this.  I wanted to know what “significantly accelerate performance” meant in the real world.

I opened as SolidWorks file of a toy lego car from 3D Content Central in Shot.  It was a small file that consists of about 8 unique parts.  I added materials, set an environment, set up a camera view and then it was time to render.  In the render dialog box Shot gives you the option to choose which method (CPU, GPU, Hybrid) you’d like to use to process your render.  I saved three separate renderings of the car using a different method for each one.  The results were pretty amazing. 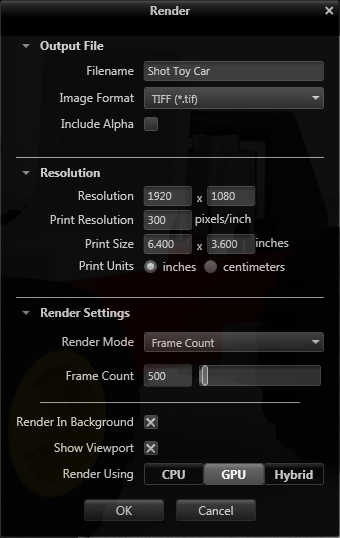 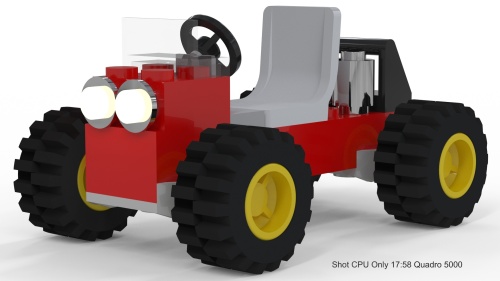 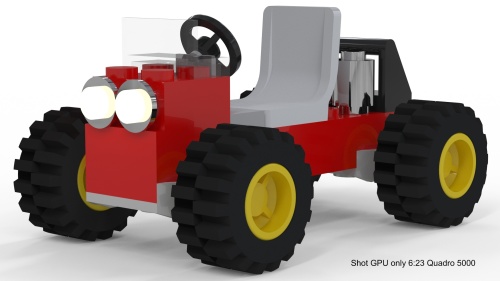 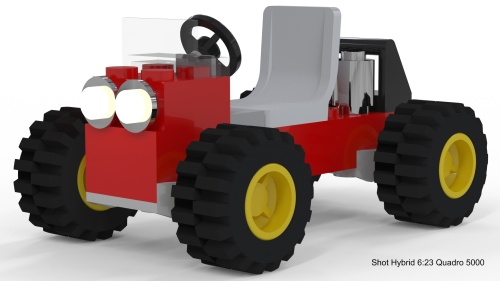 Conclusion: The Quadro 5000 performed well for me in my 30 days of testing with SolidWorks and my short test with Shot.  It’s certainly a very capable performance minded card.  With a retail price of approximately $2250 it’s probably more than I would spend (or want to spend) on a graphics card.  That said, if you’re a person who works on large assemblies in SolidWorks or creates images in GPU rendering software such as Shot then the Quadro 5000 would be a good investment.  Yes, it carries an upper level price but the performance payback for the demanding user should be relatively short.  If you’re thinking you’d like a new NVIDIA Quadro card at a lower price point you should have a look at Anna’s SolidMuse.  Anna will be reviewing a couple of the lower level Quadro cards as well as  the Quadro 6000.