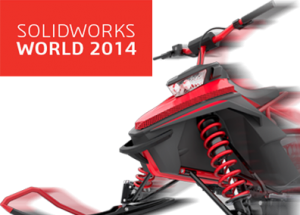 The last attendees are arriving today and everyone is registering for SolidWorks World 2014. The conference officially kicks off tonight at 5:30 with the welcome reception in the partner pavilion.  The official numbers can’t be calculated until Monday but I’m told they on are track to be about 6000 attendees.

I’ve been walking the halls of the convention center and the streets of San Diego the last couple of days  soaking up the sun and warm temperatures.  It’s quite a change from the -13F I left back home.  I’ve bumped into lots of old friends and user group leaders and it’s been great catching up with everyone.  One of the most talked about topics so far this year has been the location of SolidWorks World 2015.  We have one clue from Richard Doyle who swears he has no idea where it will be.  The 2015 conference will be held in a city that has never hosted a SolidWorks World. A lot of cities have been thrown out as ideas but there hasn’t been a consistent front runner.  What do you think?  Where will SolidWorks 2015 be held?

Some things to note about this years conference.

There are a number of SolidWorks Mechanical Conceptual sessions listed in the agenda and a couple of press conferences on the topic.  This makes me think DS is finally going to release the product to consumers.

If you’re attending SolidWorks World and want to learn more about rendering and animation be sure and stop by my two sessions.

If you you’d like to talk computing power, rendering, animation, SolidWorks user groups or just about anything else you can find me at the Boxx Technologies booth in the partner pavilion at certain times throughout the conference.