SolidWorks World 2014, It’s Been a Decade 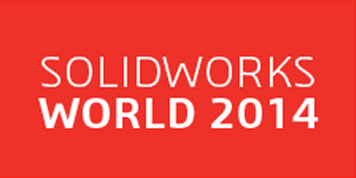 It really just doesn’t seem possible but this will be my 10th consecutive SolidWorks World!  My first SolidWorks World was in 2004 in Boston.  Boston in January isn’t for everyone and that probably had something to do with why the conference attendance was low that year.  For me however it was great.  Living 4 hours north of Boston we typically have temperatures in the single digits (or colder) and a few feet of snow at the end of January.  Boston had temps in the 30s and a few inches of snow. It’s also an easy drive and since I covered that my employer was more wiling to pay the conference fee and hotel.  I was able to participate in alpha testing for the first time and the Boston conference is where I passed my CSWP exam.  The old 8 hour exam that was part written, part modeling.  I even gave the model mania contest a try although I didn’t do so well.

What happened in the years between 2004 and 2014.  Well, I started a SolidWorks user group, won user group leader of the year, participated in a lot more alpha testing, met some really great people, went to theme parks, met the guys from OCC, heard Burt Rutan, Steve Wozniak, Gene Kranz and Jim Lovell give some amazing talks, became a blogger, learned black jack from an MIT black jack team player, have presented 9 years at World and whole lot of others things I don’t have space to write.  If you really want to read a few more you can see what Richard Doyle posted on his blog.

Fast forward to the present and some things are different.  I’m now self employed, have two kids, am a SolidWorks World veteran and San Diego is a whole lot warmer than Boston in January.  Some things are still the same though.   Like in 2004 I’ll be participating in alpha testing again this year but no model mania contest.  I still don’t do well in those.  I’ll be giving two presentations this year. I’m hoping we will finally have a version of SolidWorks Mechanical Conceptual (dare I say V6) that is actually available for everyone to use.  I’m still having a great time at SolidWorks World and its still the best place to network with SolidWorks users from all over the world.