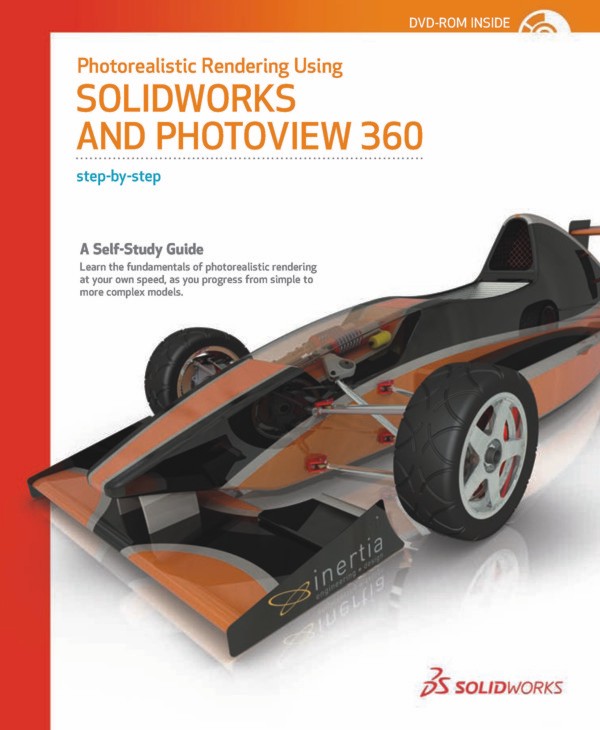 The Photorealistic Rendering Using SolidWorks and PhotoView 360 Step By Step Guide is now shipping!  Everyone who has purchased during the pre buy period will receive their book very soon as they all shipped on 4/22/11.  Special pricing on both the PhotoView 360 and Creating Animations guide will remain in effect until Wednesday April 27th.

Photorealistic Rendering Using SolidWorks and PhotoView 360 is a new step By step guide from DS SolidWorks.  This guide replaces the PhotoWorks guide and is specifically written for PhotoView 360 2011.  At 562 pages it covers all aspects of PhotoView 360 as well as RealView and OpenGL graphics modes in SolidWorks.

Just to clarify and in the interest of full disclosure.  This guide was not written or published by me.  I was contracted by DS SolidWorks as a technical consultant for the guide.  I also receive a portion of the sale from each guide purchased from this website.  Now that we have out of the way let’s see what’s inside.

Photorealistic Rendering Using SolidWorks and PhotoView 360 is a self study guide.  It’s meant to teach rendering techniques, theories and tools at a pace you choose.  Each chapter builds on the previous one introducing new tools and concepts through case study examples that guide the reader along with step by step instruction.  Example exercises can also be found at the end of each chapter giving the reader a recap of the chapter and allowing them more samples for practice.  The included DVD gives the reader all the model files necessary to follow along with each chapter in both completed and uncompleted states.

In Chapter 7 decals are covered.  Not only will you learn how to create, map and save decals but, you’ll also be exposed to non traditional uses of decals.

Chapter 8 is all about cameras.  Cameras can be used in both SolidWorks and PhotoView 360 and have benefits not only for rendering but model visualization as well.

Chapter 9 talks about the different methods to output your rendered image.  You’ll also explore ways to make the render preview faster, some of the output options, how to schedule renders and how to utilize your saved images in other applications.

In Chapter 11 the power of Display States and Configurations are shown.  Both are excellent ways to easily explore different rendering options such as lighting and appearances.

Chapter 13 gives a better understanding of reflective and transparent appearances and some of the techniques used to make working with them easier.

Chapter 14 is a gallery of images all created with PhotoView 360 and is meant to give the reader a good understanding of what’s possible using the software.

There are also three appendix’s that cover in great detail appearance settings and recommended hardware.

You can view a full table of contents here.