SolidWorks World 2013 finished up about a month ago.  It doesn’t seem possible that much time has passed but my schedule has been so crazy it’s hard to keep track of time in general.  Since I’m posting so late I’m not sure it’s worth reporting all the details everyone else already has so I thought I’d give you the highlights of what I did and didn’t like.  I’d also like to wrap up with a little information about SolidWorks Mechanical Conceptual.  Here we go. 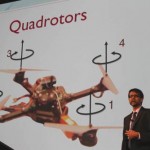 There were two speakers during Tuesday’s general session.  One of them was Vijay Kuhmar who’s an  engineering and applied science professor at the University of Pennsylvania.  Vijay talked about the work they’ve been doing with robotic helicopters.  More specifically how these helicopters can work independently but as a team to accomplish all sorts of tasks.  We saw them fly through hoops, do flips, play the James Bond theme song and what was really impressive, work together to build structures.  Keep in mind, the robots were not remote controlled, they were actually analyzing data and making decisions based on the data “thinking” to complete a task.

The other was Elias Knubben from the Bionics Projects division of Festo.  Elias talked about how Festo is designing 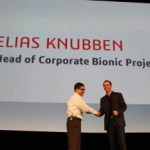 future projects based on nature.  We saw a gripper machine where the arms are based on an elephant trunk and the fingers based on fish fins.  What impressed me was how elegant and seemingly simple the designs were yet they accomplished complex tasks.  What really brought oohs and awes from the crowd though was an actual mechanical flying bird.  The design was based on an actual bird and if you were standing a distance away and saw it flying you’d never guess it was a machine.  It was very impressive to say the least. 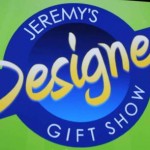 Every year the SolidWorks team does a skit to showcase some of the new enhancements for the next release.  This year’s skit was titled, “Jeremy’s Designer Gift Show” and it was a spoof on the infomercials you’d see on late night TV.  It was very comical and did a nice job of showing off some of what’s to come in the 2014 release.  I’m not going to cover the enhancements here but if you want to see them check out Ricky Jordan’s write up.  I will say the enhancements shown looked to be solid which leads me to believe the 2014 release will be a good one.  Every year I think, wow that is the best skit they have done and then the next year they out do themselves.  This year was no exception.  This may be the best skit the team has put together.  Well, until next year of course 😉

The offsite event this year was at Universal Studios Island of Adventure Park.  Yes, the entire park was rented just for SolidWorks World attendees.  Free rides, free food, free drink, no waiting lines.  Just doesn’t get any better than that! 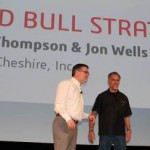 Art Thompson and Jon Wells from Sage Chesire talked about the engineering behind the Red Bull Stratos jump.  I’ll be the first to admit I didn’t understand everything they were talking about.  Sending a man in a capsule attached to a balloon to the edge of space so he can jump and free fall back to earth is a complex process.  Watching the video of Felix Baumgartner jump from the capsule was pretty intense.  I can’t even image sitting in his seat.  This was definitely one of those stories where you think, ” this is unbelievable” even though you’re watching it happen.

SolidWorks World is really just a very large user group meeting. The people you meet, connect and reconnect with there help to define the SolidWorks World experience.  It may be SolidWorks employees, users, the presenters, maybe all of those……….. it’s the people and the interaction with those people that make SolidWorks World the great event it is.  That’s my opinion anyway but really, if nobody was there would you want to go?

Sponsor speech’s during the general sessions

This year during the beginning of each general session the larger sponsors of the event were given 10-15 minutes to talk on stage.  This was something new this year and hopefully it’s not repeated next year.  A 10-15 minute sales pitch isn’t something I want to see during the general sessions.  The place for that is the partner pavilion. 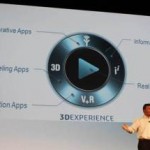 If I see one more speech, watch one more video, read one more word or hear one more talk about the “3D Experience Platform” I’m going to be sick.  If I understand the message correctly, (this may be a big IF) with Dassault Systemes  3D experience platform a company can design/model, simulate, manage data, virtually display the data and then connect it to everyone from conceptualist to end consumer using the web and social networking. You should go to this page so you can read all about the 3D Experience platform and draw your own conclusions about what it is or isn’t.

Myself as a SolidWorks user I guess I don’t understand how the 3D Experience Platform really benefits me.  My modeling is done in SolidWorks, my data management is done using Enterprise PDM, my simulation is done using SolidWorks simulation tools.  I can virtually share my design with clients using SolidWorks tools like, PhotoView 360, Motion and e-drawings and there are plenty of ways to use the web or social networking to connect with clients/consumers.  I never really have to leave the SolidWorks ecosystem to achieve the 3D experience as I understand it.  I suppose I could use 3Dvia to communicate my design to the world rather use the SolidWorks provided tools or maybe I could use 3Dvia tools in conjunction with SolidWorks tools.  The problem is. 3dvia tools are more like a video game rather than a realistic representation (movie quality) of a 3D World and the translation between SolidWorks and 3Dvia really isn’t all that good.  I never have to travel to any other parts of the compass to achieve this 3D Experience they keep talking about.  Granted this could be because I’m not a large multi million/ billion dollar company but I bet I represent the typical SolidWorks user more than I don’t.  So when Dassault Systemes keeps pushing the 3D Expereince Platform on me the SolidWorks user I just keep thinking, they don’t understand me or my business at all. 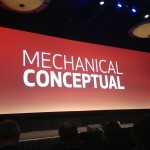 After years of waiting SolidWorks finally introduced a product based on the Dassault Systems V6 technology.  It’s not SolidWorks V6, that name isn’t being used anymore.  It’s named SolidWorks Mechanical Conceptual.  From what was shown it appears to be some sort of conceptual modeling tool (mechanical modeling not organic modeling) that allows the user to create concept sketches, models and simulate, animate them while easily sharing them with others.  Other than some screen shots there wasn’t a lot of info given about the product.  Questions about the product at the Monday press conference really weren’t answered beyond what was shown on stage.  This leaves a lot of people wondering what we can expect.  The product will be released in the fall of 2013 but the non beta, beta is supposed to be available in March to select customers.  I’m hoping to be one of those select customers so I can see what’s under the hood.

Overall the SolidWorks team put on a great event this year.  Nice work!

You can view the recorded general sessions from SolidWorks World here.

Thank you to Mike Lord for sharing some of his pictures for this post.