Service Pack 3.0 for SolidWorks 2011 has been released and there are some great enhancements included for PhotoView 360. 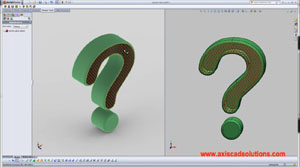 Second, the PhotoView 360 appearance surface finish controls have seen some added capability. In 2011 displacement was added to  surface finish in PhotoView 360 which gave it more capability than PhotoWorks.  In Service pack 3.0 stencil has also been added.  What is stencil?  It allows you to use some predefined and create your cutting tool to add perforations.  PhotoView 360 did have some perforation appearances in the rubber and plastic folder but the user was limited as to what they could control.  In SP 3 PhotoView 360 adds diamond and circular perforations (hole mesh) and the user has control over the hole size.  Even better the user can create any custom cutting tool using a Black and white image to create their own perforation appearance.  Shapes like hexagons, ovals, slots will work and so will things like text, logos…any black and white image you can create can be used as a stencil (hole mesh).  Recently I did some guest blogging over at the Javelin technologies blog and I created a 22 minute video discussing surface finish controls and the new enhancements found in SP3.

Overall SP3 shapes up to be a good one for PhotoView 360 users.  Makes me wonder what we’ll see in the next release.