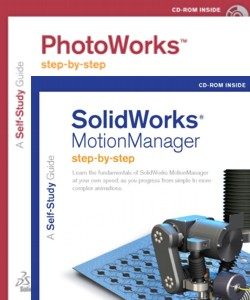 SolidWorks has just released the new PhotoWorks and MotionManager Step By Step Guides!  The Step By Step Guides are learn at your own pace manuals designed to be used by various skill levels.  As a beginner you can work your way through the chapters, each chapter covering a new topic and building on skills learned in previous chapters.  As an intermediate level user user you can pick and choose which chapters cover the information your lacking.  As an advanced user you can brush up on functionality you may only use occasionally or gain a deeper understanding of a specific area.  Each guide is fully illustrated with screen shots and images and includes a DVD with completed and uncompleted examples (in 2009 format) for you to follow along.

What’s new for the 2009 PhotoWorks Step By Step Guide?

At 601 pages the 2009 PhotoWorks Step By Step Guide is the most comprehensive version to date.

What’s new for the 2009 MotionManager Step By Step Guide?

**The SolidWorks Step By Step guides are written and published by SolidWorks Corporation.**

Posted on May 14, 2009 in PhotoWorks, Solidworks Learning Resources, Uncategorized