SolidWorks World 2013 is only a few days and I’m looking forward to attending this year for a bunch of reasons.

We will of course see a preview of SolidWorks 2014.  I’m not sure what will be added in 2014 but the SolidWorks 2013 release was very solid and well accepted in the user community.  If SolidWorks 2014 can follow the 2013 lead we should see some good things.

SolidWorks should be showcasing a version of their future V6 product this year at the conference.  You’ll notice I didn’t say SolidWorks V6.  If you remember, last fall at the DS Solidworks media event, SolidWorks announced they would be releasing a “conceptual modeling tool” this spring.  They did not say it would be shown at SolidWorks World but that was my (and I think most everyone else in the rooms) expectation.  The fact that the full SolidWorks V6 software is not ready and still not being talked about is quite interesting to me.  For reasons that are not being shared with customers DS seems to be unable to deliver any sort of “V6” product to deadlines they themselves have set.  SolidWorks Live Buildings which is based on V6 technology was supposed to arrive sometime later in 2012. It didn’t and any talk of this product is minimal at best.  When SolidWorks V6 was previewed at SolidWorks World a few years ago it was stated the technology about 3 years away.  Three years is up and there is also very minimal if any talk about this product.  All we really have at this point is this “conceptual modeling tool” we first heard about in the fall.  My thoughts, this “conceptual modeling tool” is the part of SolidWorks V6 that is actually ready to be shown while the rest of the product is still being developed.  Rather than shut out SolidWorks World attendees completely on the V6 product DS has decided to show what they have.  Pure speculation on my part but I hope we do get to see something based on the V6 technology and information is more free flowing. 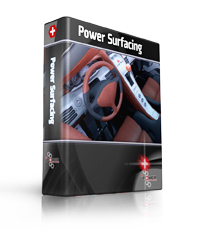 There is a great new product that has just been released from Npower software, Power Surfacing.  Power surfacing brings free form organic sub division surface modeling to SolidWorks.  It’s a plug in that has a nice almost seamless integration into the product and makes complex shape creation easier and fun.  Npower will be at the partner pavallion showing the Power Surfacing product and they also have a breakout session scheduled to give users a more in depth look at the product and it’s capabilities.  If you create complex geometry models in SolidWorks you should definitely have a look at this product.  I expect there to be a lot of excitement around this product during World.  It would actually give SolidWorks V1 users a very powerful “conceptual modeling tool” .  SolidWorks V1 is a mature CAD platform so when you combine it with Power Surfacing it might actually steal the show from any V6 technology shown?  Again, more speculation on my part.  If you’re attending the event be sure to check it out.

I’ll be giving two break out sessions this year and I always have a good time with these.  My first session will be on Tuesday at 2:45 and is titled, “PhotoView 360: What’s new in 2013”.  The session will cover (you guessed it) all the new stuff in 2013 pertaining to PhotoView 360.  We’ll take a pretty in depth look at the new features and I’ll show examples of all of them in action.  My second session is a hands on session at 1:30 on Wed.  This session will be an updated version of  the “PhotoView 360: Instant Images” I’ve given in years past.  This session is geared towards beginners and gives them a good general overview of the tools in PhotoView 360 and how to use them to create basic images.  If you’d like to learn more about PhotoView 360 be sure and stop by one of these sessions.

When you’ve been attending SolidWorks World as long as I have you meet some really good people and make lasting friendships.  While I may keep in touch with these friends by e-mail throughout the year the only place we really get a chance to meet and talk face to face is SolidWorks World.  SolidWorks World is as much about networking as it is anything else and I like to take advantage of my time there to do just that.

If you’ll be at SolidWorks World be sure to learn lots, network and talk with other users, make the most of it, feel free to say hi and most importantly have fun.  See you there 😉