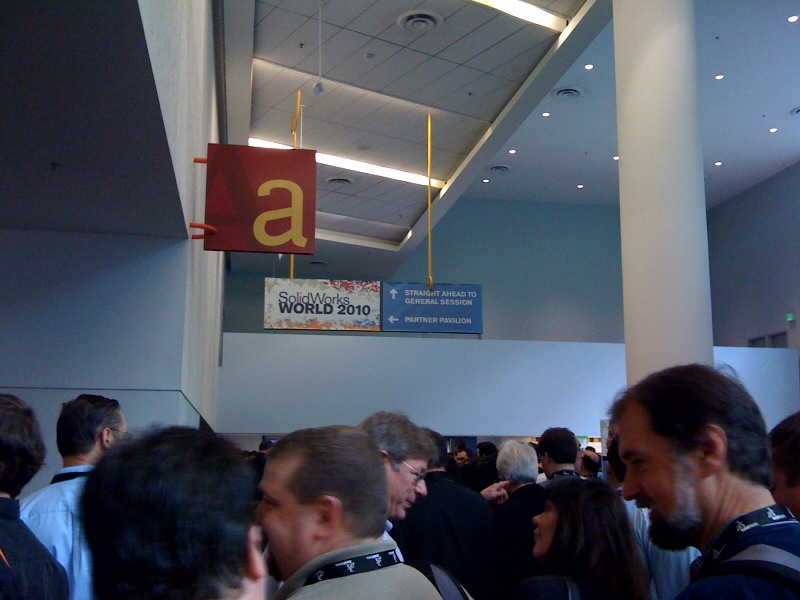 The Monday and Tuesday general sessions have taken place here at SolidWorks World 2010 and I have to say I’ve been totally blown away by them.  They haven’t been particulary flashy or overally dramatic but they have contained entertaining and interesting content.  Here’s a quick run down of some of the things we’ve seen.

There are about 5000 attendees at SoldiWorks World this year which is amazing given the past and current state of the economy.  There was an explosion of registrations in the early weeks of 2010 which helped the 5000 attendee number to be reached, maybe this is a sign  economic times are improving for 2010?

Dassault Systems
Bernard Charles, CEO of Dassault Systems was present at his first SolidWorks World ever.  Bernard spent a lot of time talking about the past the future and the strength of commitment Dassault has to its product line including SolidWorks.  He talked about the goal of providing “life like” 3D to everyone in the world and how the Dassault product line is going to achieve this.

I think the strongest message I pulled from his speech was the melding of Dassault and SolidWorks.  It’s only been the last couple of years (when Jeff Ray assumed the CEO role at SolidWorks) that Dassault and SolidWorks have started portraying the “family” message.  It appears that the family tie between Dassault and SolidWorks is getting stronger I think we’re going to start seeing this stronger tie in the form of better product collaboration.  I have the feeling we’ll be hearing about some new product announcements at the Wednesday general session and those announcements might include products that span the entire Dassault family.  In the short term,  maybe SolidWorks will finally be able to read / write Catia files?

Cloud Computing
Normally previews of new technology is reserved for the Wednesday General session.  This year a fair amount of time was spent showcasing cloud computing.  I don’t know a whole lot about the technology but in a nutshell your files and software live on a server(s) somewhere in the world (the cloud) and you can be anywhere in the world and have access to that software and data on any type of system.  What was shown was said to be totally running live for the presentation and has been being tested (in secret) for over 2 years.  The cloud computing platform hand a very modern, fresh looking interface and I thought it was pleasing to the eye.  It reminded me of CGI software more than CAD software.  There were many demonstrations shown of the benefits of this type of platform including, reliability, OS independant and performance.  There was also some new technology showing direct editing, touch style interfaces and content search and re-use.  I’m not sure this is specific to cloud computing but was being shown as a “this could be the future” type of statement.

In my opinion over the last couple of years SolidWorks has been really quite about what the future looked like.  While other CAD vendors have been showing, selling or making available for download software which has direct editing, new UI and touch interfaces SolidWorks has remained quite.  I welcomed the technology preview at the Monday general session.  It’s nice to know SolidWorks is investing heavily in the future.  They may not be hyping that investment but it’s being made and they are working.  All this technology might not be available for a while but Jeff Ray did say some of it would see users later this year.

James McLurkin
James McLurkin is a roboticist/inventor/researcher/teacher who was up after the technology preview.  His presentation got off to a rocky start with some technical difficluties but once it was rolling it was GREAT.  James talked about programming robots to live and work in the human world.  He brought about 15 very small rover robots with him on stage and showed some demonstrations of what they could do.  All very interetsting stuff but what really made the presentation was his sense of humor.  James was as much an entertainer as educator and I have to think his students benefit from his style.  He put on a great talk.

CSWP Event Report
Avelino Rochino and Mike Puckett took the stage to give the CSWP report.  There are now over 25,000 CSWP worldwide and they also announced the new CSWP Expert exam.  They also brought Jeff Ray on stage to play a round of “hole in one”.  Jeff  Ray’s task was to answer  some questions from the CSWA exam.  Every time he answered a question correctly he received one put.  Think Drew Carey and the Price is Right.  Jeff won 5 puts but it only took him two to make a “hole in one”.  For the “hole in one” put he won a Team Associated RC truck for John Matrishon, leader of the Western Mass SolidWorks User Group.  It was an entertaining Skit.

James Cameron Interview
The highlight of the Tuesday general session was the James Cameron interview given by Former SolidWorks CEO John Hirshtick.  The interview covered a wide range of topics all revolving around 3D technology of course.  I was impressed by James’s depth of knowledge in a number of areas.  He made it clear he wasn’t an engineer but has spent many hours working with engineers on projects covering  deep sea exploration, films, film equipment, camera design and a variety of other things.  He talked about how building bonds and relationships in his work with others was more important to him than awards and money.  This seemed to really resonate with the audience.  One thing that stuck in my mind was a statement he made.  When he’s ready to launch a project he assembles his team and writes a phrase on the white board for them all to ponder.  The statement…….Hope is not a strategy, luck is not a factor, fear is not an option.  Words to live by I think?

I have a another busy day today.  A PhotoView 360 presentation in the afternoon, Stump the Chumps following that and then a meeting with the Luxology team at their press dinner.  Exciting stuff.  Stay tuned.