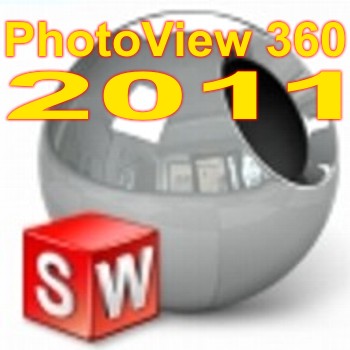 Last fall SolidWorks issued this announcement about the retirement of PhotoWorks and the future of PhotoView 360.

Beginning with the release of SolidWorks 2011, PhotoView 360 will now be the standard photorealistic rendering solution for all SolidWorks software versions moving forward.

PhotoWorks will no longer be available. With the launch of SolidWorks 2011, SolidWorks software and PhotoView 360 will provide the equivalent rendering capabilities that are now available in PhotoWorks, including, but not limited to:
– The creation and reuse of custom appearances, scenes, and decals
– The ability to directly render different configurations, display states, and model changes
– The production of rendered animations from a SolidWorks Motion study
– The ability to use physical lights in renderings
– The scheduling of renderings to be completed later

This announcement was meant to set PhotoWorks users minds at ease since many of them felt PhotoView 360 wasn’t in a position to replace PhotoWorks.  PhotoView 360 simply didn’t have a deep enough feature set and a lot of catch up would have to be played in order for it to be ready to replace PhotoWorks in one release cycle.  Even though SolidWorks made the announcement with the best of intentions its vague nature left unanswered questions and skepticism.

During the Wednesday general session at SolidWorks World 2010 we were able to see some of PhotoView 360 2011 in action.  The screen shots and descriptions were short but I was able to see enough to have a good idea of what PhotoView 360 2011 will be like.  I was also able to talk with Ron Bates, senior manager of graphical applications, at SolidWorks.  Ron couldn’t specifically comment about future releases but he could comment on things shown during the general session and was also able to give some generalized answers to certain questions.  So, lets start going down our speculation question list and see what we know.

What exactly would the 2011 version of PV360 look like?
Would we see full integration into the SolidWorks window?
These two questions can be answered together.  From the SolidWorks World general session demo it looks as though PV360 2011 will see full integration into the SolidWorks window.  In a similar fashion to what PhotoWorks users have now, the appearance pane was on the right of the screen, the render manager was on the left of the screen, the work was being done in the SolidWorks graphics window and the PV360 preview was opened in it’s own window.  It actually appeared that RealView now has the ability for the users to modify, create and save custom appearances and this RealView information is carried into PhotoView 360.  This actually gives the standard SolidWorks user greater control over RealView appearances which is a good thing I think.  The user has the choice of the standard SolidWorks viewing mode or RealView.  If the user wants to see the rendered version of the graphics area they enable the PV360 preview window.  Some people we’re worried about the full Integration of PV360 into SolidWorks because they liked the current PV360 ability to be able to process a render and work in SolidWorks at the same time.  Ron has confirmed, even with the new full integration users will still be able to work in SolidWorks while a render is processing.  To go one step further, users will be able to continue to work on the same model in SolidWorks they are rendering with PV360.  This isn’t possible in the current standalone version. 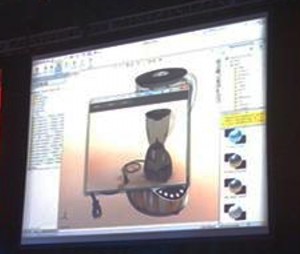 Would there be stand alone and integrated versions?
There was no mention of a stand alone version of PhotoView 360 during the general session demo.  If it’s true then the PhotoView 360 we’re using in 2010 will cease to exist and the UI, which many people seem to like will disappear with it.  Ron would neither confirm or deny a standalone version but did say technically it’s possible to have both.

Would we have more features than PhotoWorks offered?
It was impossible to answer this question from what was shown at the general session.  I think SolidWorks may have found just matching the current PhotoWorks features was challenging enough in the short window of time they are working in.  Ron didn’t comment on PV360 features beyond 2011 but did reiterate the information given in the fall announcement and made it clear the user would be able to achieve all the same things they could in PhotoWorks with PV360 2011.  Contour rendering, scheduled renders, reflective and shadow floors, custom appearances, configuration support, direct lights, rendered animations……..it’s all there.

Would there be a mac version?
There was no mention of a mac version of PV360 but since there is now full integration with SolidWorks and SolidWorks on the cloud seems to be in the not to distance future then it would be true that PhotoView 360 would be operating system independent along with SolidWorks.  The main reason behind the standalone and mac version question I believe  stems from the desire that marketing or graphics people would like to be able ot create renderings from engineering data on their own without needing a seat of SolidWorks or relying on someone from engineering to complete this task.  Looks like this ability will not be available for 2011.

Would animation support be the same as PhotoWorks or enhanced with modo type tools?
The general session demo showed a short rendered animation of a blender rotating on a table.  PhotoView 360 was the rendering tool used along with SolidWorks Motion.  There were no specific details on how the animation was created but I suspected the current motion tools were used and PhotoView 360 was selected as the render buffer at the time of save.  Exactly the same way you’d use PhotoWorks with Motion now.  Ron did confirm this was the case.  No new tools in terms of rendered animations but we may see some in the future.

Would we be able to create custom appearances from scratch (using a texture for example)?
Would decal functionality be part of PhotoView 360 rather than SolidWorks?
Would we have greater control over appearance mapping type, location and scale?
Would we be able to transfer cameras from SolidWorks to PhotoView 360?
We can really answer all these  questions with one word, integration.  Now that PhotoView 360 has been integrated into the SolidWorks window all the tools already found inside SolidWorks for things like cameras, lighting, decals, appearance controls, etc. can be used with PhotoView 360.  I have to think it’s much more time and cost effective for SolidWorks to integrate PhotoView 360 technology into the SolidWorks window rather than re-write these tools for a standalone version of PhotoView 360.  I’m sure full integration was part of the plan all along but SolidWorks didn’t have time to make this happen in one release.  Rather than give the user a fraction of the functionality they had with PhotoWorks, SolidWorks chose to provide both rendering solutions until the integration of PhotoView 360 was complete.  We’ve come full circle now with the 2011 release and I think the PhotoWorks user will feel very comfortable with the changes.  We now really have what PhotoWorks users have been asking for all along.  New underlying technology that makes rendered image creation much easier and a streamlined more intuative user interface.

Special thanks to Ron Bates and Marlon Banta from SolidWorks.  Both of these gentlemen have listened to me ramble on and ask questions for years about rendering.  I may have even complained a time or two.