PhotoView 360 2010 introduces a lot of new functionality that makes it a more capable product and moves it closer to replacing PhotoWorks in the 2011 release.  I’ve created eight tutorial videos in cooperation with SolidWorks to explain and expose users to this new functionality.  The videos will be appearing at the SolidWorks Gallery  website along with the other PhotoView 360 tutorial videos and gallery images in the very near future.  Until then I’m going to give you a sneak peak at all of them right here at my blog!  I’ll be posting one video a day for the next five days, be sure and check back each day to view them all.

If you’ve ever brought a model into PhotoView 360 and found the “floor” to be in the wrong orientation then you’ll love this enhancement.  In PhotoView 360 2010 you now have the ability to control the floor orientation relative to the XYZ coordinates of the model.  No longer do you need to go back to SolidWorks to solve this issue.  Implementation of this feature is simple, you choose which axis is up and which side is the top (or bottom) and PV360 takes care of the rest.   Watch the video to learn how. 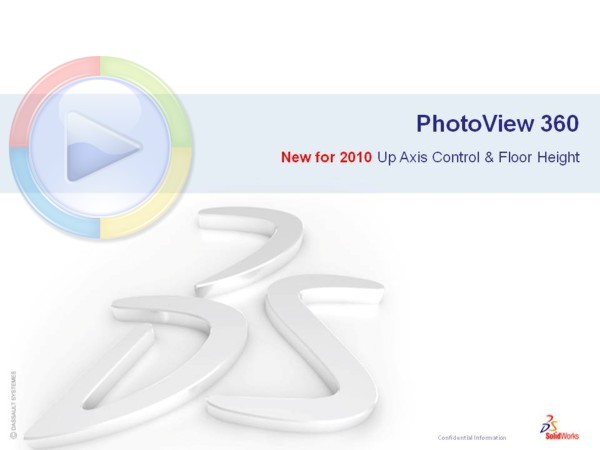